Terpenes, also known as isoprenoids, are the essential oils responsible for cannabis's unique aromatic profile. Terpenes are composed of repeating units called isoprenes. In the cannabis plant, these essential oils ward off insect predators and protect them from environmental stresses. For humans, terpenes are proving to be robust therapeutic agents.

Terpenes have a wide range of health benefits and have been studied for numerous medical applications. Terpenes are classified as mono, di, tri, tetra, and sesquiterpenes based on the number of isoprene units the terpenes have. Used widely in natural folk medicine, studies are pursuing them for modern medical use.

Their antiplasmodial activity has created interest in its potential as an antimalaria drug. Monoterpenes have been studied for their antiviral characteristics. Certain terpenes have also shown potential for treating cancer and diabetes. Terpenes are able to be administered in a variety of ways and can reduce medication’s side effects.

For cannabis users, terpenes may lead to a better experience without as many side effects. For instance, it’s thought that terpenes in the cannabis plant can increase the blood-brain barrier permeability and affect how THC binds to cannabinoid receptors. Some terpenes can suppress the short-term memory loss associated with THC use.

It’s important to take this information with a grain of salt. Most studies into terpenes and health have been performed on animal models and with isolated compounds. We still need more research on the complex web of interactions between terpenes and cannabinoids. Anecdotal evidence in aromatherapy patients, however, shows terpenes have many health benefits. 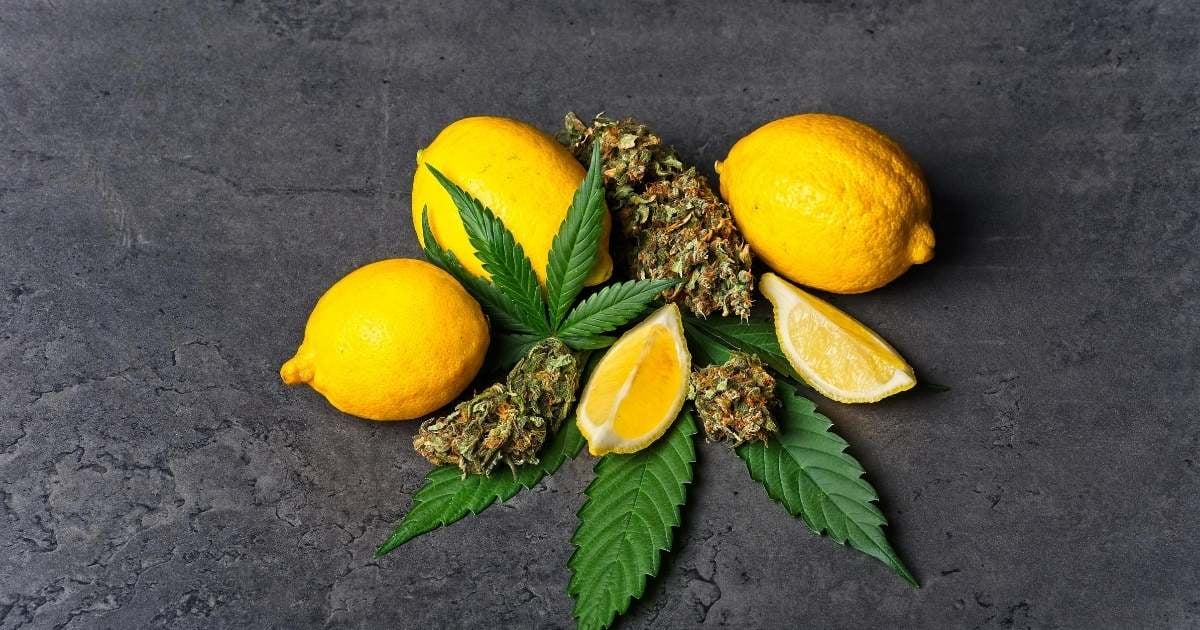 Limonene has a wide array of effects on cancer. A population study found that those who consumed citrus fruit peel had a reduced risk of developing skin cancer compared to those who consumed only citrus fruit and its juices. When taken orally, limonene can stall the progress of cancer. Some research shows that limonene prevents inflammation and oxidative stress.

Myrcene, also known as beta-myrcene, is a monoterpene found in cannabis, parsley, lemongrass, cardamom, mango, hops, and many more fruits and plants. Myrcene is a common compound that has a peppery, balsam, and spicy aroma. Some estimates show that myrcene accounts for over 20% of many cannabis strains’ terpene profile.

As a result of its relatively high terpene concentration, myrcene significantly affects the smell of your strain. Myrcene has been used throughout history in folk medicine as a painkiller. Researchers believe the myrcene terpenes can inhibit pain and inflammation, although its exact mechanism of action is unknown.

More commonly, myrcene is known for its sedative effect. A 2002 study on mice found that myrcene had sedative properties at high doses. Studies on mice show that myrcene has muscle relaxant effects and increases the amount of time spent asleep. The results worked better with a combination of conventional medicines.

A 2015 study published in the Journal of the Korean Society for Applied Biological Chemistry found that myrcene induced cell death of human breast cancer cells. A study in 2017 found that myrcene protected human skin against ultraviolet light-induced aging. Its antioxidant properties could potentially enhance the effect of protective lotions. 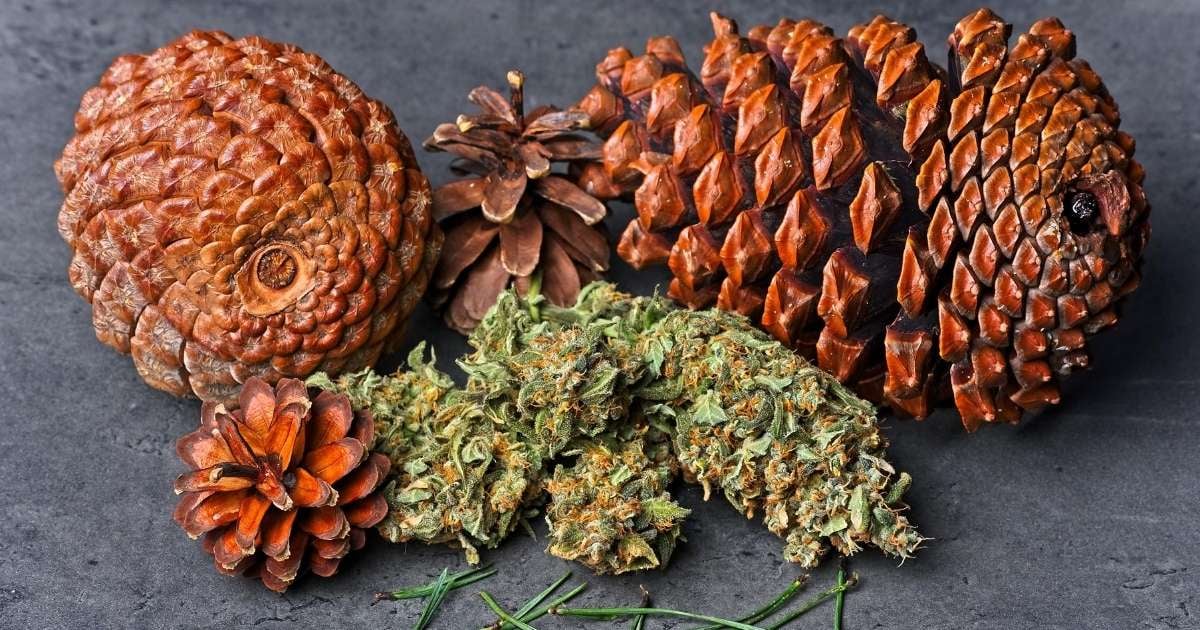 Pinene’s naturally piney scent can be found in basil, rosemary, and pine needles. Alpha-pinene is the most common type of pinene terpene, apart from beta-pinene, found in cannabis. A 2015 study found that alpha-pinene exhibited anti-inflammatory properties in animal cells. A 2017 study showed that pinene’s anti-inflammatory effects could protect the skin from UV damage.

A 2018 study found that both alpha- and beta-pinene have anti-cancer properties. In particular, researchers found alpha-pinene could treat prostate cancer in mice. Both types of pinene have also displayed antimicrobial effects in comparing Candida Albicans, a yeast fungus that can affect the human body.

Pinene has gained a lot of interest as an anti-anxiety terpene. A 2012 study discovered that beta-pinene (and linalool) produced antidepressant effects in mice. Studies have also shown pinene reduces the bronchitis infection in animals. It’s also had promising effects against Alzheimer’s disease and other neurological conditions and symptoms.

Caryophyllene’s spicy and woody aroma is found in black pepper, oregano, basil, and cinnamon. Beta caryophyllene has potential anti-inflammatory effects on conditions like arthritis. A 2018 study found that doses of 215 mg and 430 mg of caryophyllene reduced the swelling of lymph nodes in healthy rats.

In a 2016 study, beta caryophyllene reduced the growth and spread of cancer cells. It also improved the effectiveness of cancer treatments. There’s also some evidence based on a 2014 study that this terpene can help balance glucose levels in rats, which could be helpful in the management of diabetes.

A 2013 study found that mice injected with capsaicin experienced pain relief with caryophyllene. Caryophyllene has also shown promise as a sleep aid. A 2012 study suggested that the caryophyllene terpene increased sleep time and decreased locomotion and body temperature in animal models. 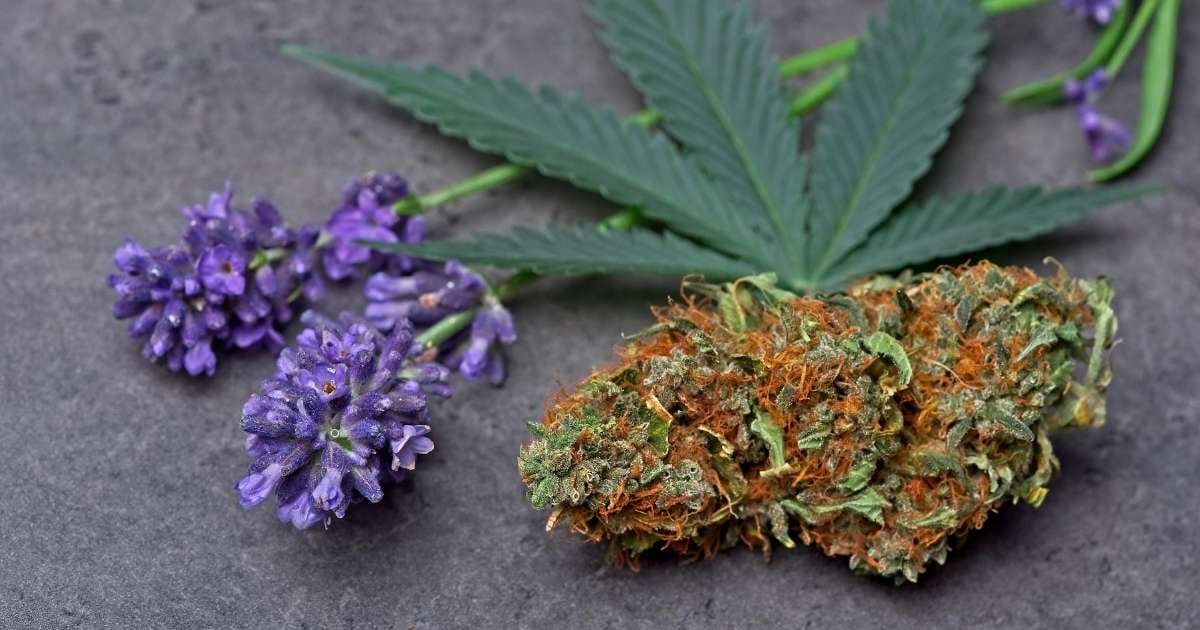 Humulene has an earthy and musky aroma found in hops, clove, and basil. A 2007 study found that humulene (along with caryophyllene) had the power to treat inflammatory diseases. More studies suggested that humulene could fight off allergies when taken orally or inhaled. Humulene also has antibacterial and antifungal properties.

When tested as a part of balsam fir essential oil, the humulene terpene showed to be an effective killer of cancer cells. Its antitumor properties worked by shutting off the antioxidant processes, which helped stop tumor growth. Humulene is also thought to be an appetite suppressant, which could offset the munchies.

Terpinolene complex aroma blends floral, woody, and citrus undertones. This terpene is thought to be slightly sedative. A 2013 study found that terpinolene had a sedative effect on animals after inhalation. Some research also suggests that terpinolene can help repel pests like mosquitos.

A 2013 study on animals showed that terpinolene destroyed cancer cells. The study found that terpinolene could provide protection against inflammation and oxidative damage. These key markers are associated with cancer. Terpinolene has also been studied for its antifungal and antibacterial properties.

Ocimene has a sweet and herbal aroma with hints of citrus and woody notes. A 2014 study on flowers of the Citrus Unshiu plant had anti-inflammatory properties. The study found that ocimene made up about six percent of the plant’s chemical profile. Another study found that black pepper, which has high ocimene levels, had anti-oxidative properties helpful for diabetes.

Terpenes’ health potential is seemingly endless. We’ve just scratched the surface of the health benefits of cannabis terpenes. Since cannabis and hemp plants have a wide range of cannabinoids and terpenes, harnessing the entourage effect via full-spectrum products could provide users with more health benefits in the long run.